Today, I made a thing. It’s a square of knitting made from a plarn (plastic yarn, which is cut up plastic bags). Yaaay!
It has a nice texture to it, and would be suitable to use as a soft scourer for dishes, or to apply texture to products with paint. I originally intended to make a little container out of it, but got bored and ended it before it gets added to my massive to do pile.
I began the Dr Who scarf. I decided to wuss out and make it thin and on quite large needles. I got thirty rows done before my fingers froze up on me, so it may take a while :(.
I can’t wait to finish my craft room organisation, but every time I start, I find projects that I want to work on. Self discipline is not my strong point.

Yay, shopping!
Gosh, I’m tired.
Ok, started buying wool for my Dr Who scarf, three out of seven colours.
I brought a container of clear embossing powder. I wanted to try using the powder like resin over images in bezels. I couldn’t find any bezels in the shops, so I’ll try it on bottle caps.
You can never have too many googly eyes and the only ones I had were tiny or neon coloured.
Sales table had some Amy Tangerine stamps, which I especially like the sarcastic sounding “oh… how lovely…”
Also quite cheap, were the bead packets. I should do some beading. Between all my other projects

The book I got, Creative Lettering, was on a library sale table. It has some good how to’s and layout suggestions that will help with some projects that I have floating around my head.
I also got some gaming magazines to make geeky pendants from.
So apart from being heavy, for me, I got some nice things to play with. Now I just have to find some time. 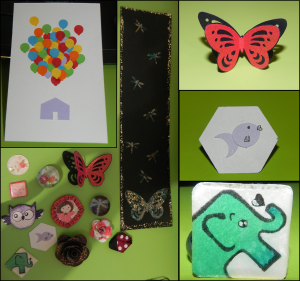 Busy in the craft room today 😀

I set my laptop up to play videos under “how to make your own craft supplies” on YouTube, and kept the creativity flowing. I brought a few new craft supplies lately, including a balloon punch, a large butterfly punch, and some stamps, so I had to have a play today.

I meant to sort out some things, after watching a craft organisation video, but when I go to the room, I needed to create.

When I brought the balloon punch, I thought it might be good for birthday cards, and it almost looked like a fish when sideways, so I made a fish with it. The idea of using it to recreate the “Up” scene hit me suddenly, and I had to see it through. I haven’t added any balloon strings yet, as I am unsure on how to do it without overloading the look with a hundred lines. I may leave it as a minimal piece. My Dad would like this, but his birthday isn’t for months.

Many of the videos today were about making your own enamel dots, or something called flairs, which are like domed images for card making and scrapbooking. Last year I picked up some clear domed sticker for that exact use, and I also had the clear vase pebbles that I played around with.

So, between refereeing kittens and crafting, it was a fairly fun day 😀

This is technically from yesterday and today, bit I had a BBQ yesterday and went straight to bed when we got home. So made some progress on my amigurumi. It’s a little skinnier than the pattern I’m using from http://abbygurumi.tumblr.com but its still cute.
I had a massive case of insomnia the other night, and went crazy looking on pinterest for bow ideas. There was some awesome ones bases off of Disney princesses and ladybugs and all sorts. I tried a couple using what I had and using my own artistic licence. The black and white one is based on Venom from Spiderman. The original had a spiderweb pattern, but he only has them in the movies, not the comics, so I left that out.
The gingham and ruby red is based off no other than Dorothy from the Wizard of Oz. The blue is slightly darker than intended but I think it still looks nice. I know I have the right ribbon somewhere, but my craft room is still a mess.
I want to make some Dr Who scarves, which seems easy with the simple garter stitch, but I’m not one for big projects. Also considering how many of my friends are Dr Who fans, they all may want one. 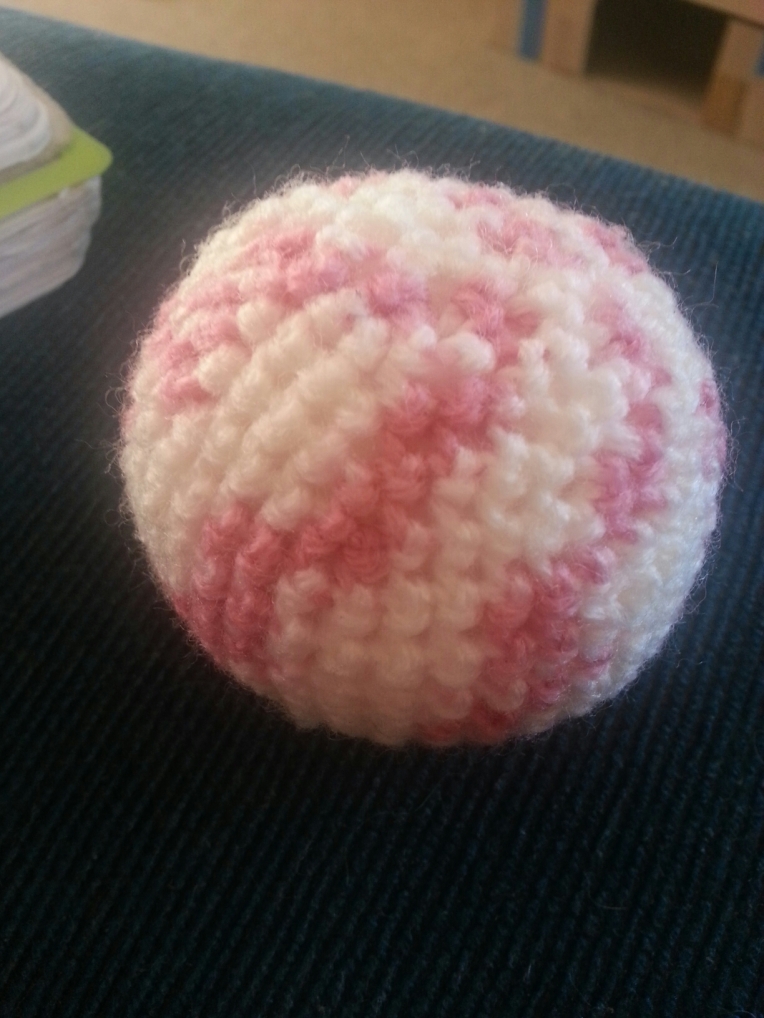 Its a ball! Its supposed to be a head, but at least I finally managed to make a nice round shape. Shows what happens when I follow a pattern!
I found this awesomely cute wool (I’m a sucker for variegated wool) and needed to make something with it. I started a scarf, but got bored quickly so its a bookmark or something…I put if on my cat as a saddle. She was not as amused as I was.
So I began an arigurumi- cute crochet creature. I did put the face on but it looks a bit weird. I’ve never been good at satin stitching noses, and it doesn’t look very happy. I might have to make the rest before it looks adorable. Even adding some ears may help. I’m not great at crochet, I much prefer knitting, but it’s harder on my hands. 😦
At least it’ll be winter soon, so I can get out my blanket projects to work on :D. 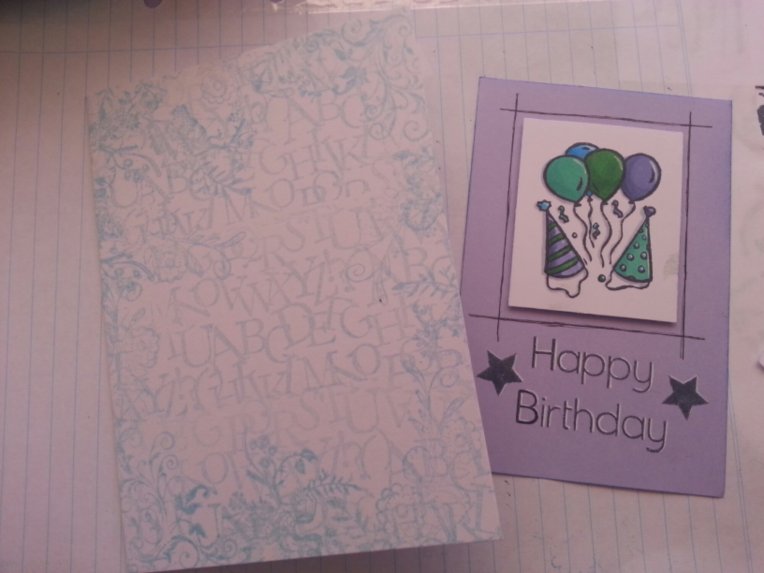 Had a bit of time in my new craft room today. No where near finished, but enough so I can play around.
I recently brought myself a Memento ink pad, so that I can use my copics. It worked well, except I haven’t mastered the ink on fingers getting onto my project. I tried to go over it with white gel pen but that wasn’t a great solution.  Lucky I was only playing with ideas and it wasn’t a card for someone.
As for the blue on white, it’s actually a card front, from a pack of 50 white cards and envelopes. I figured it’s more versatile to match my cards with my own patterned paper, and a lot cheaper, since the pack was a quarter of the price of the patterned ones.
I brought an alphabet background stamp, and was trying it out. It was nice, but the edges didn’t stamp very well, so I went around the edges with floral stamps using the same ink.